Intel Optane DC Persistent Memory, what it is and how it works. Go to the beta program

Intel officially launches the beta program: hardware manufacturers and partner companies will be able to preview the new Intel Optane DC memories. What they are and why they are destined to change the storage market by speeding up the processing in the cloud

We have often talked about Intel Optane : it is a technology on which the Santa Clara company has invested so much and is increasingly being offered in our country too.
As explained in the Intel Optane Memory article or how to accelerate the performance of the system those currently available on the market are memory modules that drastically accelerate the performance of systems based on traditional hard drives and SATA SSDs . 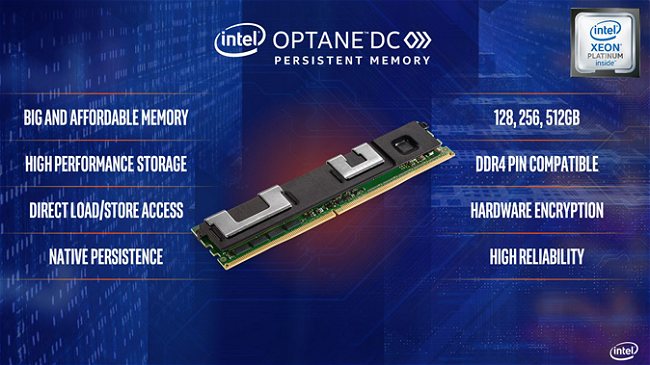 Although Intel has recently decided to take a step back and let Micron develop the XPoint 3D technology on which Optane is based ( Xpoint 3D technology will pass into Micron’s hands ), the company will continue to develop new products.

Intel Optane DC Persistent Memory is a bit considered as the evolution of Intel Optane Memory because it also combines skills aimed at the persistent preservation of data : Intel presents Optane DC memories that can be used both as RAM modules and as SSD .Today Intel has announced that it has started the “beta program” focused on Intel Optane DC Persistent Memory : this means that every cloud provider and every partner company (OEM) will be able to use a preview of the new memories that will be officially brought to the market during the first half year 2019 .

Thanks to the new Intel Optane DC Persistent Memory, combined with the new Xeon processors of the next generation, companies can revolutionize the ways in which heavy workloads, cloud processing, databases and high performance computing are managed: it becomes possible to bring performance to a much higher level, thanks to the ability to store and move data in memory quickly .

Used in the App Dire mode , applications can count on performances never seen before thanks to the possibility of keeping in store, in a persistent way, an important amount of information. The Memory mode mode , however, allows you to use Intel Optane DC as a volatile memory using it as additional memory capacity than that offered by the RAM modules installed at the motherboard level.
It will thus be possible to have an additional, extremely fast, large storage capacity up to 512 GB . All this without the need to change a line of software side code.

Innovative approaches to  in-memory database computing offer enterprise clients improved speed and storage for Big Data applications.  Altibase recently announced that it is working with Intel, to help with the process of capturing and organizing large amounts of memory.  Specifically, Altibase’s HybridDB, which merges an in-memory database and on-disk database into a single, fully ACID compliant, SQL standard compliant DBMS engine, is using the Intel® Xeon® processor E7 v2 family to help support the large amounts of memory it needs to satisfy clients’ insatiable appetite for faster processing and memory.

According to Altibase, “Altibase conducted a test of HDB with the Intel Xeon processor E7 v2 family. The results showed that the in-memory data performance improved in comparison to the previous-generation Intel.”

So what does it all mean for enterprise customers seeking extreme performance, capacity, and scalability?  The collaboration between Altibase and Intel allows higher speed processing, incorporating large volumes of data that is leading to measurable improvements of processing in-memory.  This is one of a number of successful recent collaborations between Altibase and Intel that are accelerating the advancement and deployment of in-memory database technology across businesses of all sizes.

For example, a few months ago, Altibase connected its HyrbidDB with the Intel® Distribution for Apache Hadoop (Intel Distribution) to allow users to execute real-time, high performance database processing from its HybridDB database management system while users were still able to scale and store data indefinitely using the Intel Distribution.